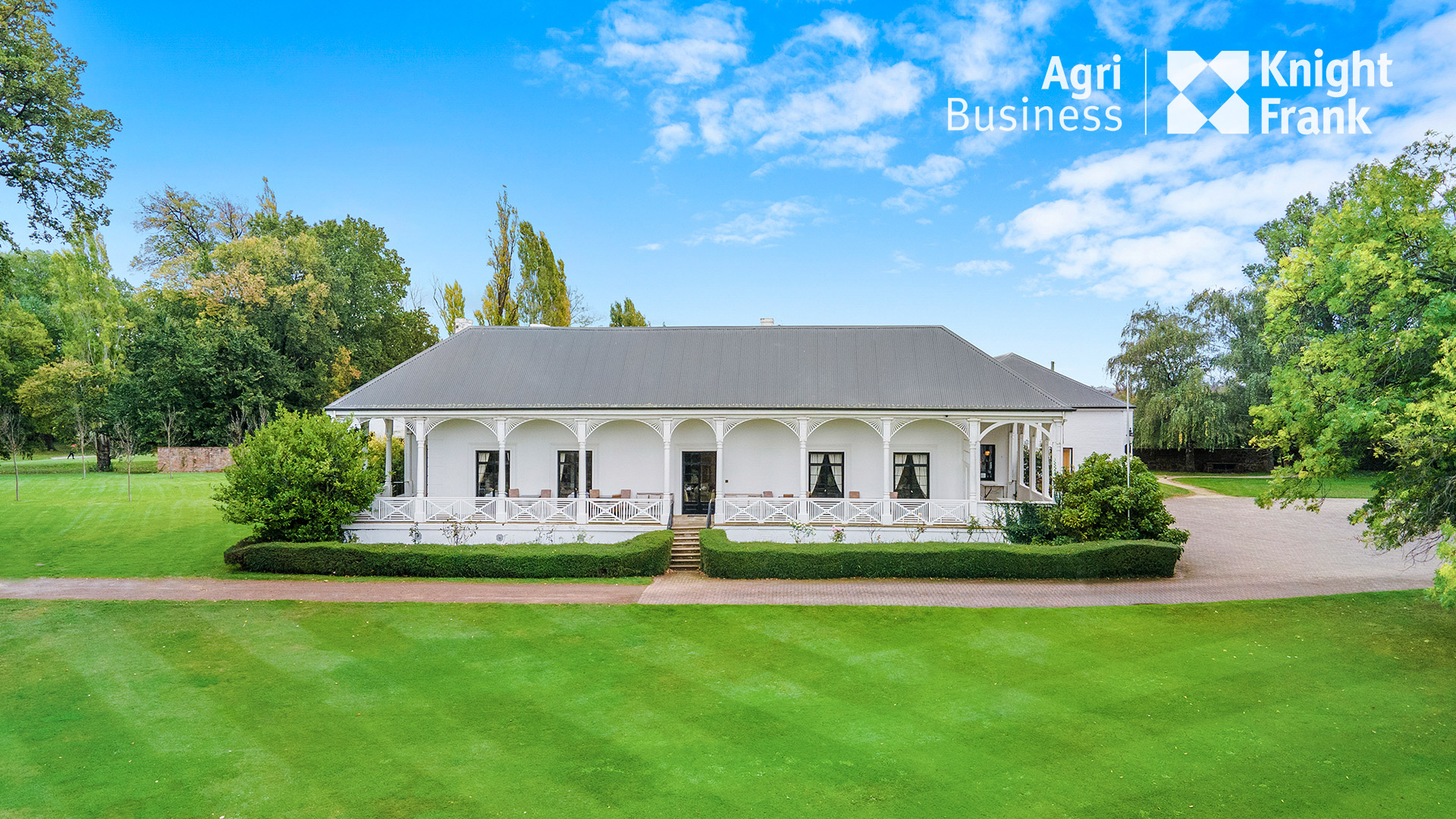 During a storied history that dates back to 1828 and includes significant contributions to the rural, cultural and political life of Tasmania, Quamby Estate has adopted diverse, distinguished roles - yet this is also a property that has remained true to its origins as one of Australia’s most desirable family homes. It is exactly this identity that defines Quamby today.

Surrounded by some 64ha of prime farming land, where privacy might just be the most valuable attribute, the homestead is a work of art as much as a triumph of architecture. An elegant flag-stone paved verandah wraps around the residence to the north and the east, bringing beautiful light and sublime sights to spaces that include two evocative reception rooms, each rich in classic character, both featuring romantic French doors and magnificent fire-places.

entertaining on a grand scale while the adjoining snug, with its own bar and fire-place projects patina and personality that’s impossible to resist. A kitchen of commercial capability caters to every modern day need, confirming the style and success with which Quamby has moved with the times.

Ten bedrooms, each accompanied by a sophisticated ensuite, deliver divine accommodation to a design that’s arresting in its luxury, its allure and its ability to create a world that lets you unwind, slow down and take delight in such exceptional environs.

The home of Sir Richard Dry, the first Australian born state premier and the first Australian recipient of a knighthood, Quamby was once colloquially known as the government house of the north in Tasmania. Today, this refined, revered property is renowned as a family retreat of un-paralleled prestige – and remarkable value for money by mainland standards.

Easily reached from other state capitals by flights to Launceston airport, with ample space to create a private landing strip if so desired, Quamby Estate lies just moments from quaint Hagley village in a setting of scenery, greenery, sophistication and grandeur. Launceston city is readily reached, but once here, leaving will be the hardest part. 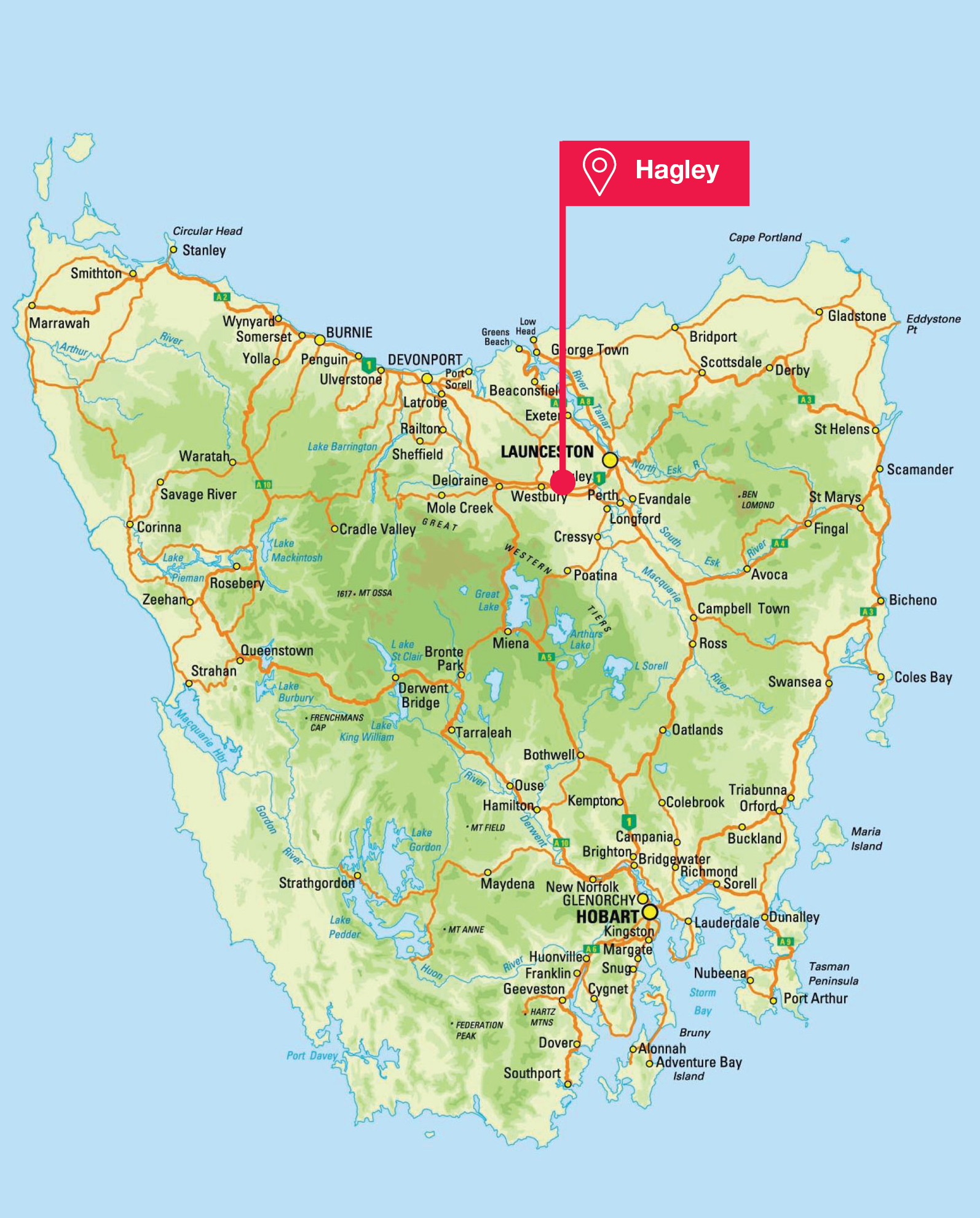 Hagley is a rural locality and town in the local government area of Meander Valley in the Launceston region of Tasmania. The locality is about 5 kilometres (3.1 miles) north-east of the town of Westbury and approximately 30 kilometres to Launceston.

The area is well known for some of Tasmania's most productive agriculture with a temperate climate, rich red soils and excellent rainfall. 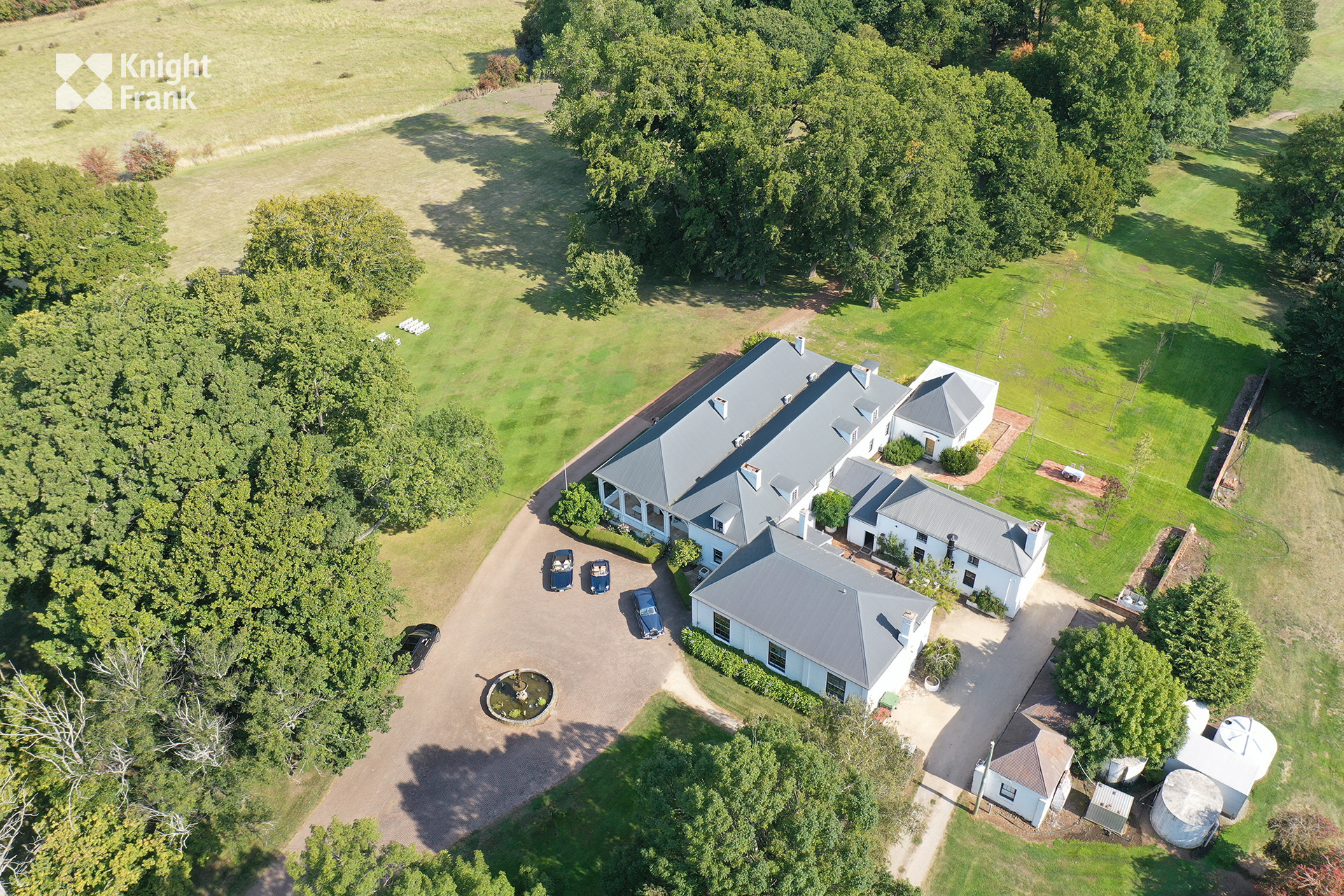 The main homestead is of white Anglo-Colonial design and was built by Richard Dry Snr over 10 years commencing in 1828.

Well positioned to command a fine view of the surrounding landscape, the homestead has an easterly aspect, with a distant view of the Ben Lomond plateau, while providing a prominent visual landmark for the local commuter roads.

The house has double-hipped roofs and attics, while the rear hip has end dormers. Its plan is structured around a transverse hall. Aside from the ballroom, which was added later, the principal rooms open directly onto the verandah through eight-pane French doors in pairs with transom lights. The verandah is stone flagged with turned timber posts and fine brackets and balustrade trellis work. The unbroken roof line gives the impression of broad eaves. An unusual six-panel entry door with half sidelight and a diagonal pattern fanlight is located at the north-eastern end of the hallway, on what seems to be the side of the house. The Chinese influence in the design of the house is limited to the trellis work to the verandah and fanlight over the entrance door. Behind the house are the early kitchen building, a store room and laundry building, and an enclosed lawn containing two rose gardens. A wide lawn in front of the house sweeps down towards the lake.

The hedgerows in this area provide a distinctive English element and contribute to the impression of Quamby being a grand old English country estate.

Quamby owners have included Sir Richard Dry, the first native-born State Premier and knight in Australia, inheriting the Estate from his father Richard Dry Snr who died in 1843, the Estate at that time being some 30,000 acres. In years gone by it was referred to as Tasmania’s “Government House of the North” where eminent colonial grandees gathered to campaign for an end to convict transportation to Tasmania, to debate and draft the Tasmanian constitution and to plan the expansion of the State’s rail transport system.

Sir Richard Dry had no heirs and just prior to his death in 1868 he had begun to shed the vast acreage of Quamby. He was buried beneath the chancery in the Church he founded, St Mary's at Hagley. Soon after Lady Dry sold Quamby and sailed for England and at the time it was one of the most important land sales ever held in Tasmania. Today Quamby’s wealth of mature trees remains a lasting tribute to the foresight of the remarkable Dry family.

With the portions of the land sold off over time, by 1963 the estate was reduced to circa 600 acres and in time it has been reduced down to its current holding of circa 158 acres (64Ha).

Until recently Quamby operated as the headquarters for the Tasmanian Walking Company which relocated in 2019 due to requirements for additional accommodation.  It continues to host gatherings and upmarket weddings as well as the private  golf course. 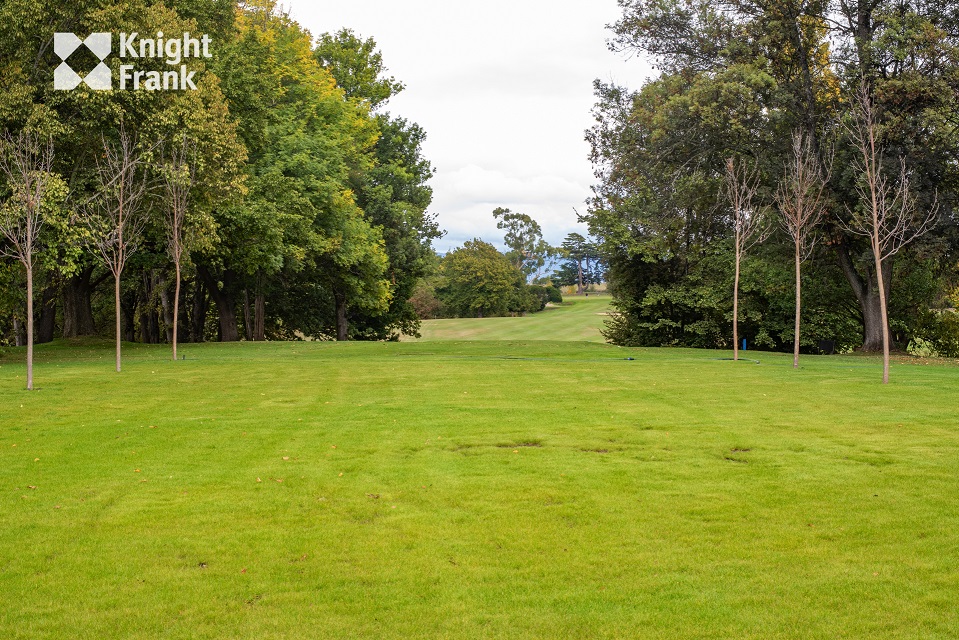 During the 1990s a nine hole golf course was developed by the then owners. The  8th hole at 576 metres,  is the longest in Tasmania. This beautiful course is positioned on a high elevation with magnificent views to Ben Lomond in the East and the Great Western Tiers to the South. Fairways are lined by large mature trees planted in rows with garden avenues, hedgerows, watercourses, lakes and ponds.

Quamby golf course features 9 lakes, cascades, creeks and challenging ‘Scottish’ bunkers beautifully groomed from specially refined Scottsdale sands. The Georgian Club House was built in the 1850’s as original Estate Manager’s office. Complemented by an adjoining bar and restaurant it offers a perfect setting to enjoy a refreshment after a round of golf.

The impeccably manicured golf course’s Number 1 Membership holder is none other than Sir Richard Branson. 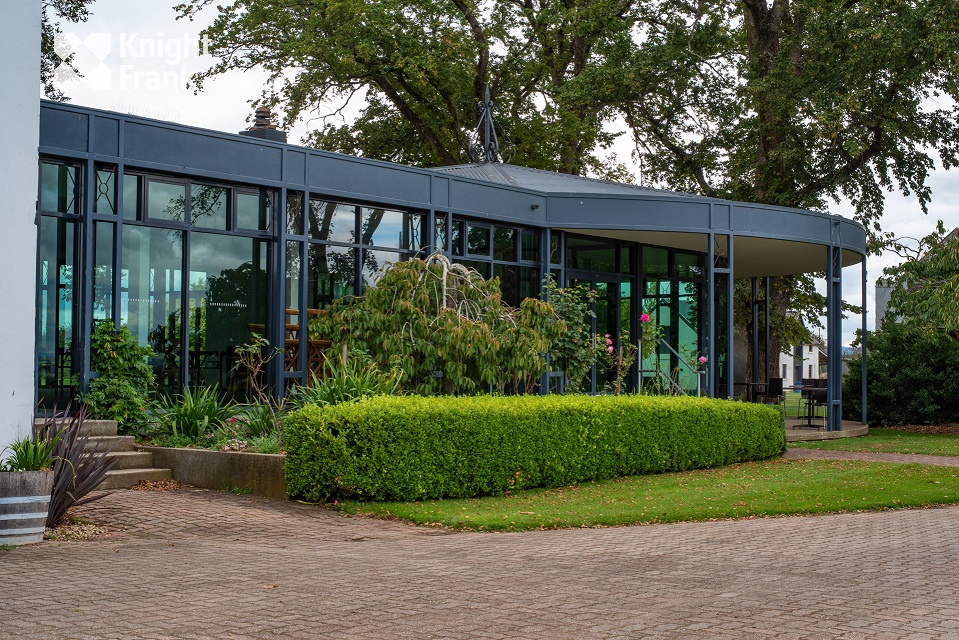 In addition to the homestead, golf club and golf course there exists a modern self-contained function centre with seating for up to 180 patrons and full commercial kitchen and related facilities.

The Land and Irrigation 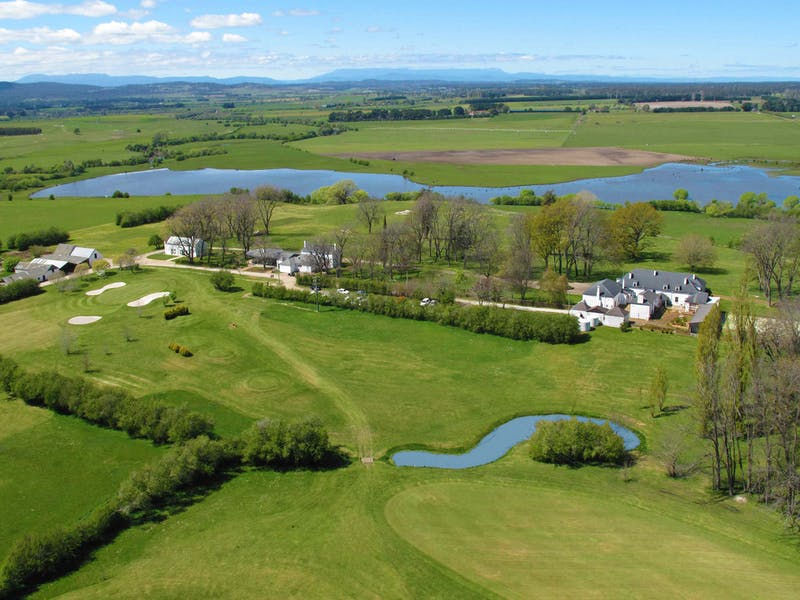 There is 64 hectares of prime agricultural land. The red/chocolate free draining soils typical of this area provide plenty of scope to enhance the farm with cropping and livestock production.

An irrigation license is in existence, the details of which can be provided. 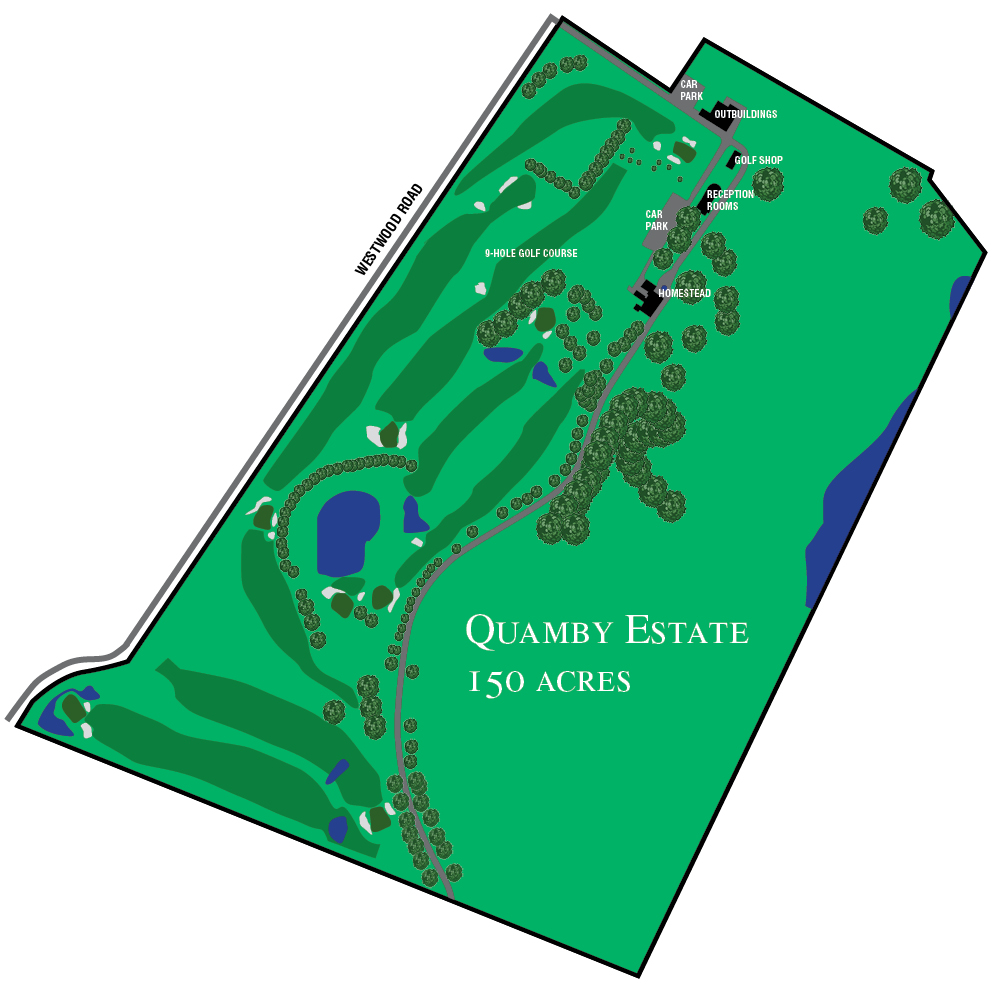